The Strati: a 3D-printed electric car that could be built in 24 hours

When Jay Rogers drove away from the International Manufacturing Technology Show in September and toured around Chicago in a two-seater, you could be forgiven for not paying much attention. Unless, of course, you’d watched it rise up out of a 3D printer the size of a shipping container over the past 44 hours. Meet the world’s first 3D-printed electric car. 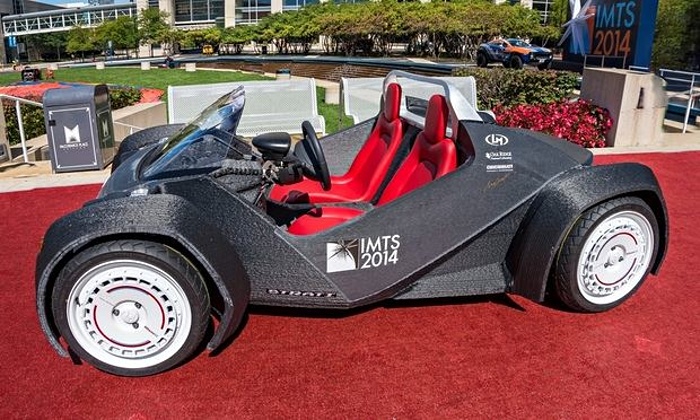 This model, called the Strati, is the result of a four-and-a-half month process, from design to finish, but according to Rogers, the CEO of Local Motors, the company behind the Strati, the timescale for future models could be cut to as little as six weeks, and the printing itself to just 24 hours. That’s a pretty quick turnaround.

The key is simplification. On average, a car contains thousands of parts; the Strati contains just 49. This seems incredible, but as Rogers explains: “If you can make a vehicle out of one material, you can massively reduce the number of parts.” Certain components, such as the engine, tyres and suspension, cannot be printed, but the majority of the car, from the chassis to the seats, was created using a carbon-fibre reinforced thermoplastic, which Rogers says has the same strength as mid-grade aluminium. His team are currently refining the process further so they can print “different flexibilities, durometers, or compressibility of this material” in different regions of the car. This would allow them to make softer plastics for the seats, for example, or compression bars that would increase the safety of the vehicle.

Rogers claims the Strati will be on the road within the next 12 months. He’s previously stated that the car would cost between 15,786.7€ (15,723.27€) and26,311.17€, but says the price will drop. Eventually he wants to see localised factories producing cars designed with their environment in mind. For example, a small factory in Alaska could manufacture Stratis designed specifically for cold weather, while another in Utah could produce cars suited for the desert. Rogers hopes that this principle could be applied to other industries in the US as well, helping to bring manufacturing back from overseas.

Lab-grown bones will save patients

Lab-grown bones will save patients from having their own bone harvested if they need a graft Nina Tandon is CEO and co-founder of EpiBone, a biotech company set up in 2012 to bio-engineer bone tissue […]

One big step for man as astronaut controls robot from ISS