Should we be worried about this latest escalation?

Tensions between the two neighbors — who are technically still at war — ebb and flow. Earlier this year, an annual exercise between South Korean and U.S. forces, involving thousands of troops and state of the art military hardware, didn’t go down well with North Korea. It fired two short-range ballistic missiles into the East Sea, also known as the Sea of Japan, after slamming the exercises as “dangerous nuclear war drills for invading the DPRK.” Leader Kim Jong Un then called for full combat readiness and oversaw military facilities, according to KCNA.

“The North Koreans, being paranoid in their own way, have always had this concern: ‘If there is going to be an invasion, this would be the time,'” said Philip Yun, executive director of the Ploughshares Fund, a group that advocates nuclear disarmament. “But that’s not the intent on the U.S.-South Korean side.” 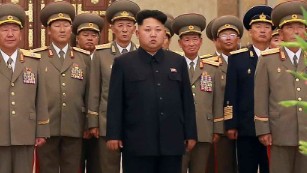 This time around, North Korea appeared to shoot at loudspeakers the South had set up along the DMZ blaring out propaganda in the wake of the landmines incident, prompting a retaliation from South Korean forces. Pyongyang had previously threatened to blow up the speakers and warned of “indiscriminate strikes.”

“North Korea is especially sensitive about propaganda from South Korea,” explained CNN’s Seoul producer, KJ Kwon. “They’ve even shot at balloons carrying leaflets critical of Pyongyang that activists have floated across the border.”

So this isn’t war then?

Unlikely. North Korea usually responds to “provocations” such as military drills with angry rhetoric and perhaps a weapons test. Messages of impending doom and the firing of short-range rockets or missiles into the sea tend to become routine as the military exercises approach. “Their response is carefully calculated to convey a particular message,” said Kwon.

And that message is not always intended for its enemies abroad.

According to Yun of the Ploughshares Fund, playing up the threat from the U.S. helps the North Korean leadership’s propaganda efforts to control the population of the isolated nation.

For now, the North is unlikely to push things any further. “According to analysts in South Korea, they might move massive numbers of troops closer to the border and then retreat, just as a provocation,” said Kwon.

Predicting the secretive North Korean regime’s next move is a notoriously difficult game. Though tensions may not reach 2013 levels when long-range rocket tests and its third nuclear test earned it tougher United Nations sanctions. Pyongyang responded by ramping up its threats of nuclear war against South Korea and the United States.

One North Korean government website even uploaded a YouTube video showing an imaginary missile attack on Washington. The U.S. decision to fly B-2 stealth bombers, which are capable of carrying nuclear weapons, over the region only served to further antagonize North Korea amid the annual military drills.

“That was a really bad escalation of the tensions in the Korean peninsula,” Tong Kim, a visiting scholar at the U.S.-Korea Institute, part of Johns Hopkins University, said of the period. 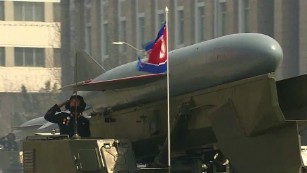 But Pyongyang’s decision to carry out the rocket launch and nuclear test were most likely carefully timed, according to Yun, who was part of U.S. teams that negotiated with North Korea under former President Bill Clinton.

“They game everything out. They don’t do things off the cuff for the most part,” he said of the North Koreans. “If they’re going to do something very provocative, they have an extensive decision tree laying out many options.”

The moves appeared to be aimed at advancing North Korea’s technology and making Kim, still a relatively new leader, look strong inside the country, Yun said. They also coincided with political transitions in South Korea, China and Japan.

The ‘Kim factor’ — more dangerous than his father?

Kim Jong Un is “similar in action but stronger in rhetoric” than his father, Tong Kim said. “Except that North Korea under Kim Jong Un has newer and more formidable weapons.”

Some of the techniques seen under Kim certainly recall those employed during his father’s rule.

During the tensions in early 2013, North Korea declared that the armistice agreement that halted the Korean War in 1953 was no longer valid.

The announcement sounded unsettling, but North Korea had already said in 2009 that its military was no longer bound by the armistice because South Korea was joining a U.S.-led anti-proliferation plan.

In 2013, the North also tried using the silent treatment, cutting off a military hotline with the South. That was similar to an approach it had adopted in 2009 when it stopped responding to calls after the military exercises started.

But during 14 years of Kim Jong Il’s rule, the United States and South Korea “had a track record of what North Korea would do and a sense of what to expect,” Yun said. “Kim Jong Un was new, you didn’t know how far he would go, which added to the uncertainty.”

A number of significant events have occurred pertaining to the Ethereum ecosystem in recent days. Last week, the code for the proposed first step of Ethereum’s technical transition toward the adoption of proof-of-stake mining, Vitalik […]

Scientists have discovered a new human-like species in a burial chamber deep in a cave system in South Africa. The discovery of 15 partial skeletons is the largest single discovery of its type in Africa. […]